Advertisemen 300x250
The duo of Mr Nsima Ekere and Sen. Godswill Akpabio, Monday, shunned the coronation ceremony of Ntenyin Solomon Etuk, Oku Ibom Ibibio/President General of the Supreme Council of Ibibio Traditional Rulers, despite the ceremony being postponed from the earlier scheduled date to ensure that their party’s campaign flag off in the state was hitch free.
It would be recalled that the coronation ceremony had earlier been fixed for December 28, but was shifted to today, 31st, after the APC announced 28th as the chosen date for the flag off of their campaign and Akwa Ibom International Stadium as the venue.

In a statement, the Ifim Ibom leadership said it decided to honour President Muhammadu Buhari by shifting the coronation to a later date. Buhari was going to be part of the APC campaign flag-off ceremony in the state.

But in what many have described as a brazen display of pride and affront on Ibibio nation, Akpabio and Nsima shunned the invitation extended to them by the coronation planning committee.

“Nsima has decided not to reciprocate the honour and goodwill that we showed to them; Ibibio people will not forget it,”

inthenews.com leant that Akpabio, Nsima, and other APC chieftains were given invitation to the well-attended ceremony. Speaker Onofiok Luke, Chairman of the coronation planning committee, it also gathered, had given instruction that the ceremony be devoid of politics and that every Ibibio sons and daughters as well as top political figures in the state be invited.

But while others like Sen. Ita Enang and Umana Okon Umana showed up to honor the Ibibio King, the duo of Akpabio and Nsima shunned the ceremony without any excuse.

Meanwhile, the coronation ceremony of Ntenyin Solomon Etuk recorded a marked success. If was attended by first class chiefs across the country including the Ooni of Ife, Oba Adeyeyi Enitan Ogunwusi and the Obong of Calabar, Edidem Ekpo Okon Abasi Otu. 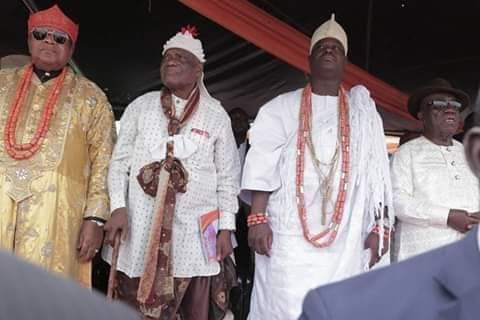